Create an Account - Increase your productivity, customize your experience, and engage in information you care about.

The good news is that TD Beta continues to weaken. The bad news is that there is a possibility that the rain bands redevelop this evening bringing new areas of heavy precipitation. The possibility of redevelopment combined with the slow movement of the system is keeping Mont Belvieu in a high risk category for excessive rainfall and flash flooding.
City staff is continuing to monitor the storm and it's track this evening. We will update this page and www.facebook.com/cityofmontbelvieu if the weather and road conditions change.

Your city staff was briefed by the National Weather Service this morning about the ongoing and forecasted impacts of Beta. The storm has now been downgraded to a tropical depression, but localized bands within the storm could still bring 5-10+ inches of rain to Mont Belvieu. (See the graphic from NWS below) The storm has begun to trail to the east towards us which will bring those heavier rains into our area later today into tonight. And, while the Tropical Storm Warning and Storm Surge Warning have been canceled for Chambers County, a Flash Flood Watch is still in effect due to the fact that we are included in the high-risk area for excessive rainfall. Be sure to stay aware as the heavier part of this system moves into our area.
Remember: Turn Around... Don't Drown! 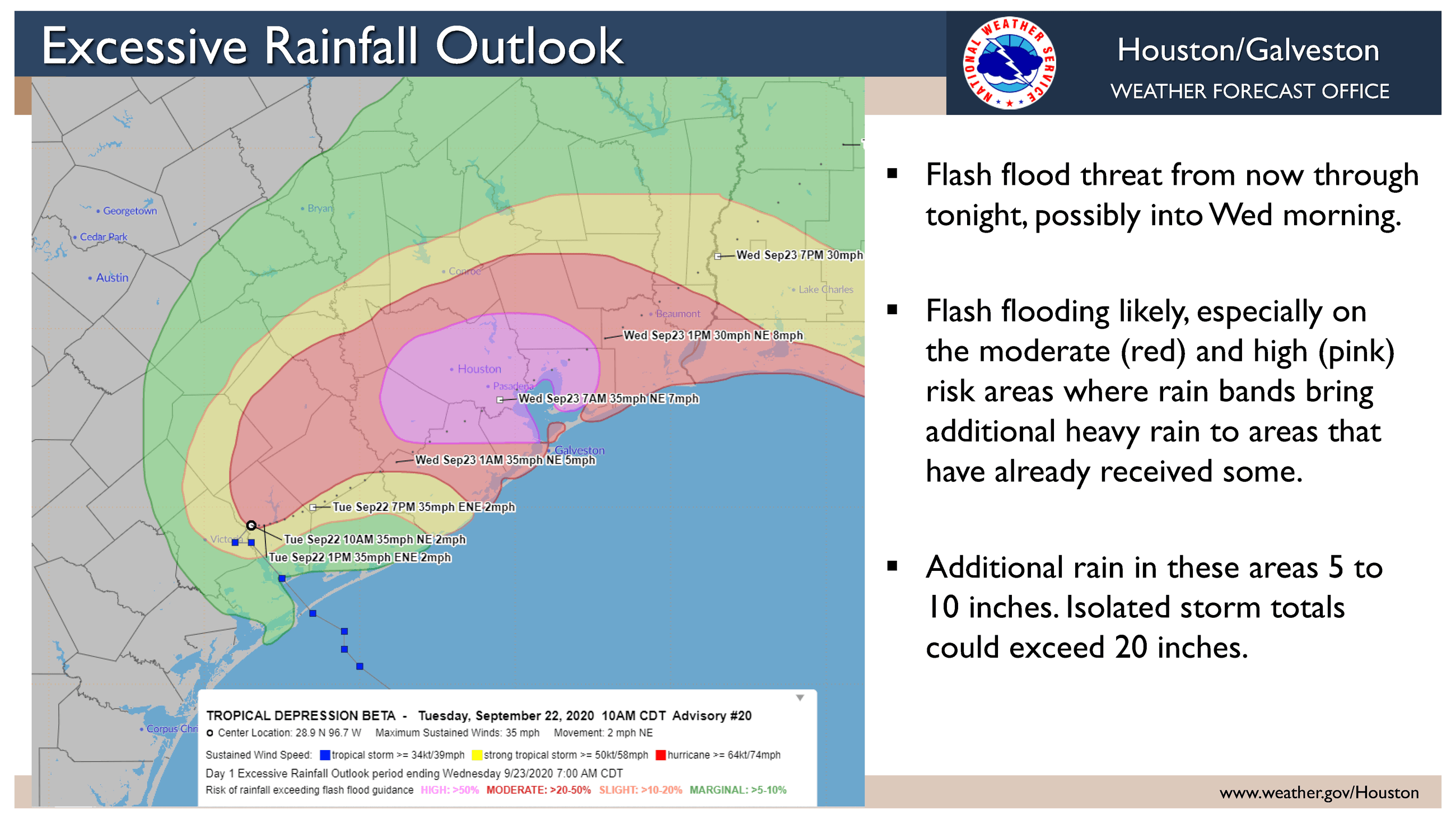 City staff was just updated by NWS on TS Beta. As the storm continues to weaken, there continues to be less concern about damaging winds. But, the concern over storm surge combined with locally heavy rain remains. The forecast now is showing 5-10 inches of rain possible in our area over the next 24-36 hours.

City staff attended this morning's National Weather Service webinar update on Tropical Storm Beta. In the update there was some good news; the storm has slightly weakened and the rainfall forecast has decreased. However, Beta still poses a threat to our area. The storm, forecast to make landfall near Matagorda Bay later today/tonight, has current maximum sustained winds of 50 mph. After landfall, the storm is expected to make an east northeast turn and track up the Texas coast including the Mont Belvieu area. The National Hurricane Center (NHC) says this storm will be a long-duration rainfall event as it tracks up the coast. As the storm progresses, it brings a moderate risk of flash flooding and a marginal risk of tornadoes into our area. The storm is expected to push east of us late Wednesday; we should see improving conditions at that time.

Although attempting to better organize itself earlier this afternoon, Tropical Storm Beta continues to battle dry air and wind shear as it moves west-northwestward towards the middle texas coastline. The current forecast intensity remains unchanged. Beta remains on track to make landfall near Matagorda Bay late Monday, then take a turn tothe northeast Tuesday through Thursday. Arrival of tropical storm force winds is most likely Monday morning, but could arrive as early as this evening.We continue to anticipate a prolonged heavy rainfall and coastal flooding event from Beta with elevated tides already occuring bringing coastal flooding. Coastal flooding will remain a threat through midweek with the worst of the storm surge anticipated on Monday and Tuesday. The first rainbands from Beta have started to move onshore today, but the heaviest rain will not occur until Monday into Tuesday. Generally 6 to 12 inches of rain is expected with locally higher amounts of around 15 inches along the immediate coast. The combination of storm surge and heavy rainfall along with high tides will elevate the risk of dangerous flooding along the Barrier Islands and inner coastal locations through mid-week.Chambers County has already issued voluntary evacuation orders for low-lying and flood-prone areas. If you are within an area where an evacuation warning has been issued, please heed the advice of City and County officials. The storm surge and flash flooding impacts of Beta will have the potential to be life-threatening.

Chambers County Road and Bridge Department has informed us that they have dumped sand for residents to use, along with some bags, at McLeod Park. The park is located at 10717 Langston Dr., Mont Belvieu.

UPDATES DELIVERED TO YOU

If you are not already subscribed to Mont Belvieu INFOrce, this is the time to do so. Being prepared, not scared, is the best thing you can do during severe weather. The registration link is below.

TS Beta is maintaining its current intensity and there's a high likelihood that it will not grow to become a hurricane before landfall. The Hurricane Watch for our area has been dropped. There is still a heavy rain/flood threat to our area although forecasted rain amounts are uncertain. Currently, Mont Belvieu is receiving rain from the storm's most leading bands; Heavier bands of precipitation from Tropical Storm Beta will come through our area Monday through Wednesday. With this amount of forecasted precipitation, Chambers County is in the moderate area of flash flood risk. Additionally, we are also under a marginal risk of isolated tornadoes on Monday. If you hear the City's emergency sirens during this time it is a result of a true threat; Residents will need to take precautions and seek shelter at that time. As the storm pushes ashore and then tracks into our area, gusty winds up to tropical storm force are possible here in Mont Belvieu. 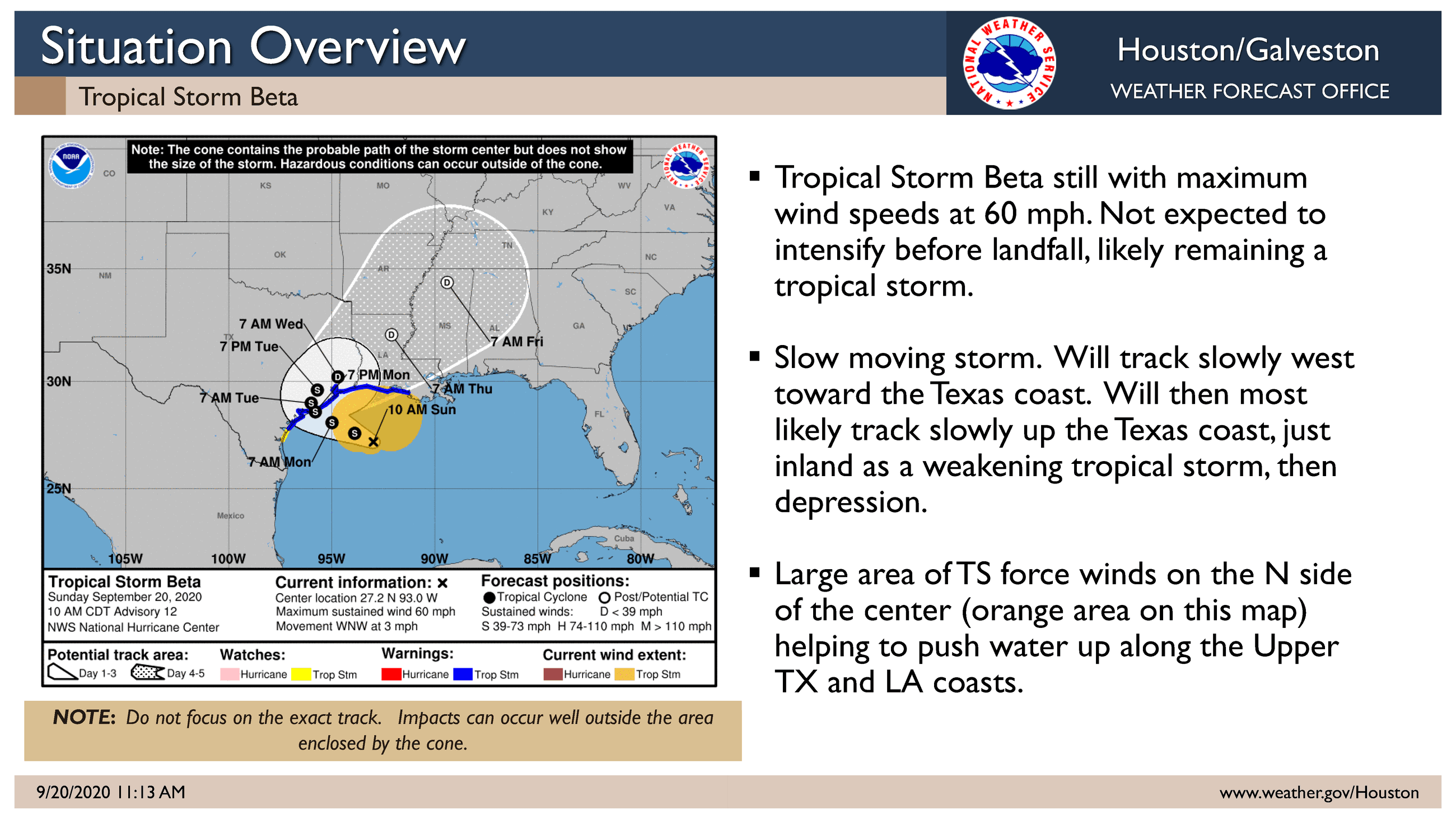 Chambers County Road and Bridge Department has informed us that they have dumped sand for residents to use, along with some bags, at McLeod Park. The park is located at 10717 Langston Dr., Mont Belvieu.

Updates delivered to you

If you are not already subscribed to Mont Belvieu INFOrce, this is the time to do so. Being prepared, not scared, is the best thing you can do during severe weather. The registration link is below.

A Tropical Storm Warning has been issued for Chambers County. This means that tropical storm force winds are expected in our area within the next 36 hours.

As of 10:00 a.m., Tropical Storm Beta remains in the northwestern Gulfof Mexico and continues to move slowly to the northwest. The latestsatellite imagery indicates that the system has taken a more westwardturn this morning. This motion is expected to continue through tomorrowand into the early part of next week as it approaches the middle Texascoast.This has the potential to become a prolonged coastal flooding eventfor the SE Texas coast. Beta continues to pose the threat of dangerousstorm surge, as well as the possibility of flooding rains and hurricaneforce wind gusts. The combination of storm surge and heavy rainfallalong with high tides will elevate the risk of dangerous flooding alongthe Barrier Islands and inner coastal locations through mid-week.

Be prepared... not scared; Sign up for updates and alerts sent to your cell phone and email via Mont Belvieu INFOrce. You can find the registration link at the bottom of this page.

At 10:20 p.m. the US National Weather Service Houston-Galveston Texas has issued a Hurricane Watch for Mont Belvieu until further notice; a Storm Surge Watch is also in effect. Air Force Reserve Hurricane Hunter aircraft have surveyed the storm and have found that TS Beta is a strong and slow-moving storm. The fact that the storm is slow-moving implies the potential for very heavy rain.
City staff is continuing to monitor conditions and are in continuous contact with NWS.

Get the latest information about Tropical Storm Beta by going to www.hurricanes.gov and www.weather.gov/houston 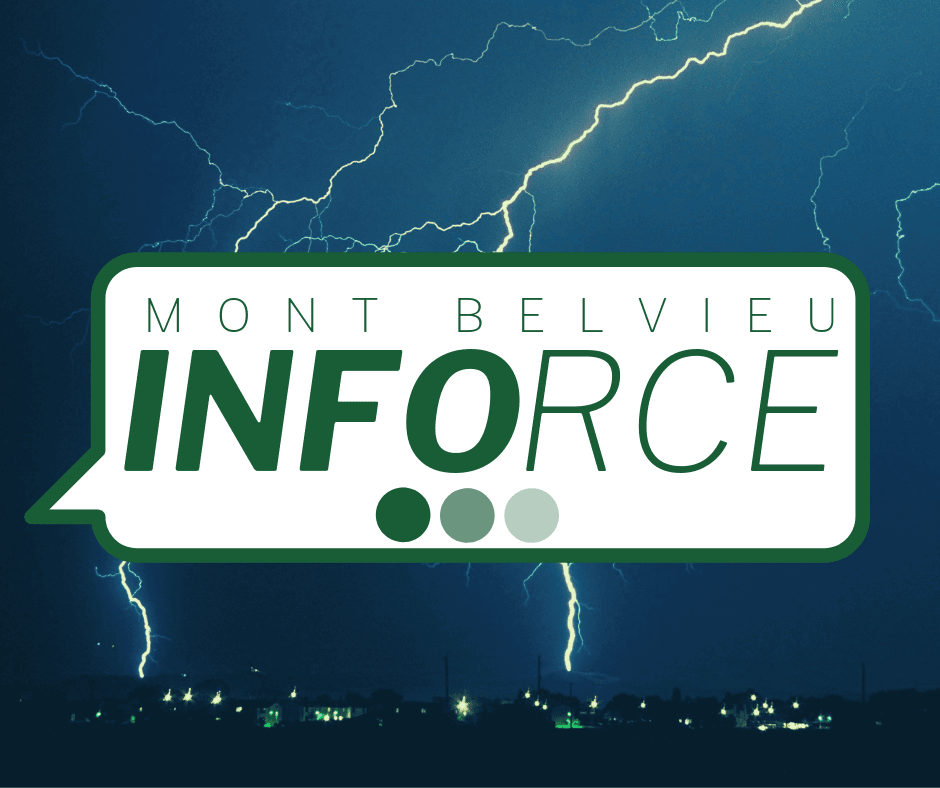 When storms are in the area, be prepared... not scared. Sign up for Mont Belvieu INFOrce - your local information source - to get updates delivered to you via call, text, and email. CLICK HERE TO REGISTER